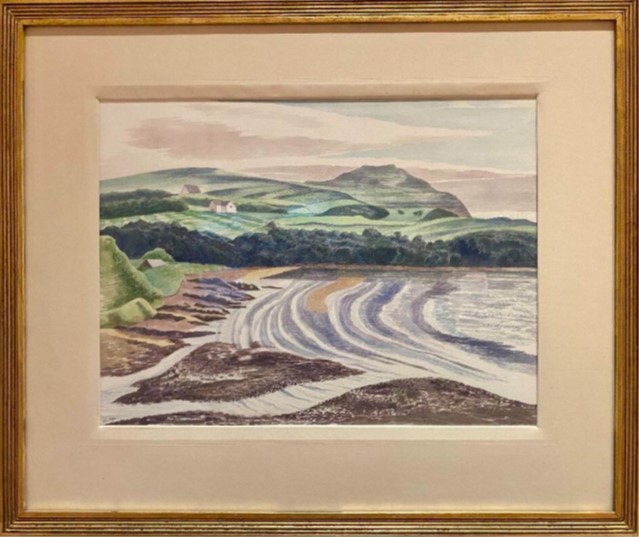 This article looks at the painting at Arundells by John Nash and explores his life
and work, now the subject of two recent biographies and a current exhibition
Sir Edward’s art collection at Arundells features great artists of the twentieth century.
The nine works by John Piper in the dining room were the subject of a previous article
in the Arundells Journal.

Other artists represented in the house include Augustus and Gwen John, John Singer
Sargent and LS Lowry, but there are many others. One of them is John Nash RA
whose beautiful watercolour ‘The Incoming Tide’ is displayed in the inner hall,
between the dining room and the library.

John Nash is perhaps less well known than his older brother Paul who was famous for
his striking Surrealist works, but John became one of the most accomplished British
landscape painters of the twentieth century. There has been a revival of interest in his
work, including a recent biography ‘John Nash: Artist and Countryman’ (2019) by
Andrew Lambirth. There is a current exhibition on Nash’s life and work: ‘The
Landscape of Love and Solace’, titled after another new biography, by Andy Friend.
Further details of the exhibition are given below.

These new retrospectives cover the remarkable life and career of John Nash. He
received no formal training – and was discouraged from doing so by brother Paul who
felt it would inhibit his natural abilities. He did, however, spend much time with leading
artists of the day, developing his own remarkable talents and attracting the admiration
of his peers.

John Nash didn’t get involved (like his brother) in avant-garde interests such as
Surrealism and abstract art. Instead he sought a true likeness, but in doing so was
able to draw out the natural structure and rhythm of the landscapes he painted.

This is evident in the picture at Arundells (top). It shows John Nash in his element,
capturing the movement of ‘The Incoming Tide’ through sweeping striations of light and
colour. The rocky outcrops on the beach and the strong hedgerow and trees add to the
natural structure of the painting as does his use of flowing lines of contrasting greens
and greys across the hills beyond.

The title of the painting at Arundells gives no indication of its location but it was thought
to be of the Dorset coast, close to the high point of Golden Cap. The shape of the cliff
line in the background is certainly similar to the characteristic shape of Golden Cap but
the deep bay isn’t typical of the broad sweep of coastline in that location.

In Andrew Lambirth’s biography (page 290) there is a different painting of the same
view which is entitled ‘Skye’. This location seems more likely given the general
character of the landscape depicted. From the 1950s John Nash made several trips to
the Isle of Skye and ‘The Incoming Tide’ is similar in style and tone to others he
produced there. But whatever its location the painting had strong associations for Sir
Edward and he was very pleased to acquire it, having initially missed an opportunity to
do so. It featured on one of his Christmas cards.

The simplification and tonal character of ‘The Incoming Tide’ reflects Nash’s style in the
latter part of his life. His earlier works are more precise representations but they still
draw out a strong sense of natural structure. These earlier works include the iconic
paintings for which he is most renowned.

The Most Famous Works of John Nash

Two of John Nash’s paintings are particularly famous and they were created after his
period of active service in northern France during the First World War.
‘Over The Top’ depicts the advance of Nash’s own battalion, the 1st Artists Rifles, out of
the trenches and across the snow towards the German lines. It was a tragic episode in
which only 12 men out of 80, including Nash, survived the onslaught of machine gun
fire. The iconic picture conveys the dreadful reality of war and the fatalistic advance of
the troops. As a ‘rank and file’ soldier in the trenches he was unable to paint or draw,
but after his period of active service he became a war artist, like his brother, and
produced images of war from his deeply etched memory of events.

In contrast his second most famous picture, ‘The Cornfield’ offers a positive prospect of
the post war world through his beautiful rendering of a British landscape at harvest
time. It was the practice of John and Paul Nash, working together, to undertake their
war commissions during the day but then devote the evenings to producing more
positive images such as this.

The two paintings (above) are set side by side as a striking and moving centrepiece to
the current exhibition about John Nash’s life and work.

A Long Life and Career

The exhibition and new biographies give an absorbing account of John Nash’s life. His
career evolved from his love and understanding of the countryside and of nature. He
produced many paintings in the localities where he lived, in Buckinghamshire and then
Suffolk, but he also travelled widely to capture the varied landscapes of Britain –
including his painting now at Arundells.

Nash’s first oil painting: ‘A Gloucestershire Landscape’ (1914) was a superb study of
sunlight and landscape with its striped foreground of harvested fields contrasting with
the green pastoral scene and distant hills beyond. It was a theme to which he would
return in 1918 with ‘The Cornfield’ – his beacon of hope at the end of the Great War.

As well as painting in oils and watercolours John Nash became a wood engraver and
print maker during the 1920s, reflecting a general revival of such work in Britain. He
used the medium to illustrate books and to produce individual prints of great quality and
detail. His output included remarkable images of plants and flowers, again reflecting
his particular interest in the natural world. Indeed, his prowess led him to become a
judge at the Chelsea Flower Show!

Andy Friend’s biography explores the personal life of John Nash. As a young man he
was deeply attracted to the artist Dora Carrington but then met Christine Kuhlenthal,
also an artist, and they married in 1918. Christine played a key role in supporting
John’s career as an artist. Their marriage lasted 58 years but was somewhat
unconventional. It allowed for ‘other loves’ but it endured, despite the trials of war time
separation and the tragic death of their young and only son who fell from a moving car.

The Current Exhibition at Compton Verney

The current exhibition on John Nash’s life and
career is open until January 23rd 2022 at Compton Verney, near Stratford-upon-Avon. Although it is a two hour drive from Salisbury this wonderful gallery, created from a Robert Adam house in a Capability Brown landscape (pictured right) has all the ingredients of a great day out. It is certainly an attractive diversion for anyone staying in the Cotswolds or travelling up the M40 past Banbury. 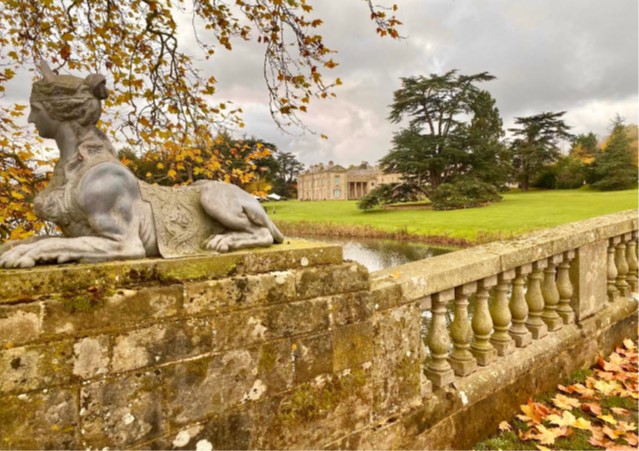 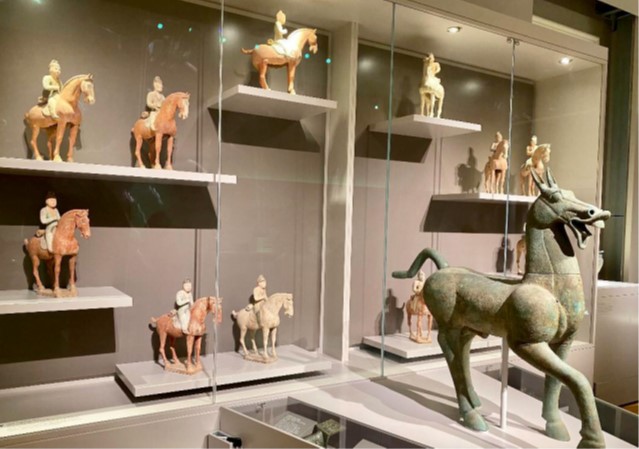 The gallery currently has another excellent exhibition of works by Grinling Gibbons as well as an impressive permanent collection featuring British portraits, some wonderful Neapolitan art and (of particular interest to Arundells) a display of ancient Chinese artefacts, including a dozen Tang horses.