‘The Nine Pipers’ – by Jon Lloyd 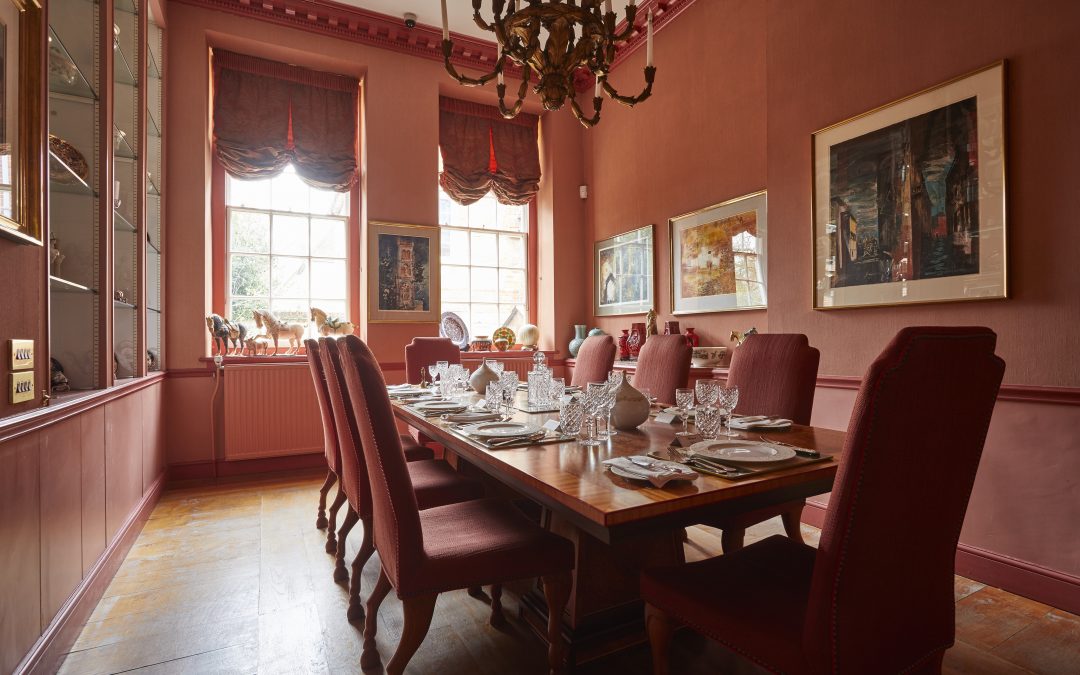 A remarkable feature of the dining room is the collection of nine pictures by John Piper, one of the most important British artists of the Twentieth century.

Piper had a lifelong interest in buildings and their settings, from architectural gems to picturesque ruins. As a young man he was a keen antiquarian, studying, sketching and writing about monuments, villages and churches, including in Wiltshire. His career as an artist was delayed by an obligation to his father to join the family law firm but that did not last and he began to pursue his chosen interest, becoming involved in the abstract art movement pioneered in Britain by the ‘Seven and Five Society’.

He worked with his future wife, Myfanwy Evans to produce the magazine ‘Axis’ which promoted avant-garde art. The magazine co operated with the international exhibition ‘Abstract and Concrete’ in 1936 (the first of its kind in Britain) and Piper contributed abstract works. However, under the chairmanship of Ben Nicholson, an arch protagonist of abstract art, the ‘Seven and Five Society’ became ever more doctrinaire in its outlook. Piper turned away from the group and concentrated more on figurative art, returning to his abiding interest in buildings and what he called “objects seen in their context”. But he still retained the ‘language’ of abstract art, and created a distinctive and expressive style which looks modern, yet is rooted in history and national identity.

This is reflected in the works displayed in the dining room at Arundells such as the atmospheric picture of Wiggenhall St Mary Magdalene Church, Norfolk. The painting of the rugged landscape at Portland Bill in Dorset is partly abstract but still expresses a strong and distinctive sense of place. The picture of Monthelie, a town near Dijon in eastern France, is more abstract still. 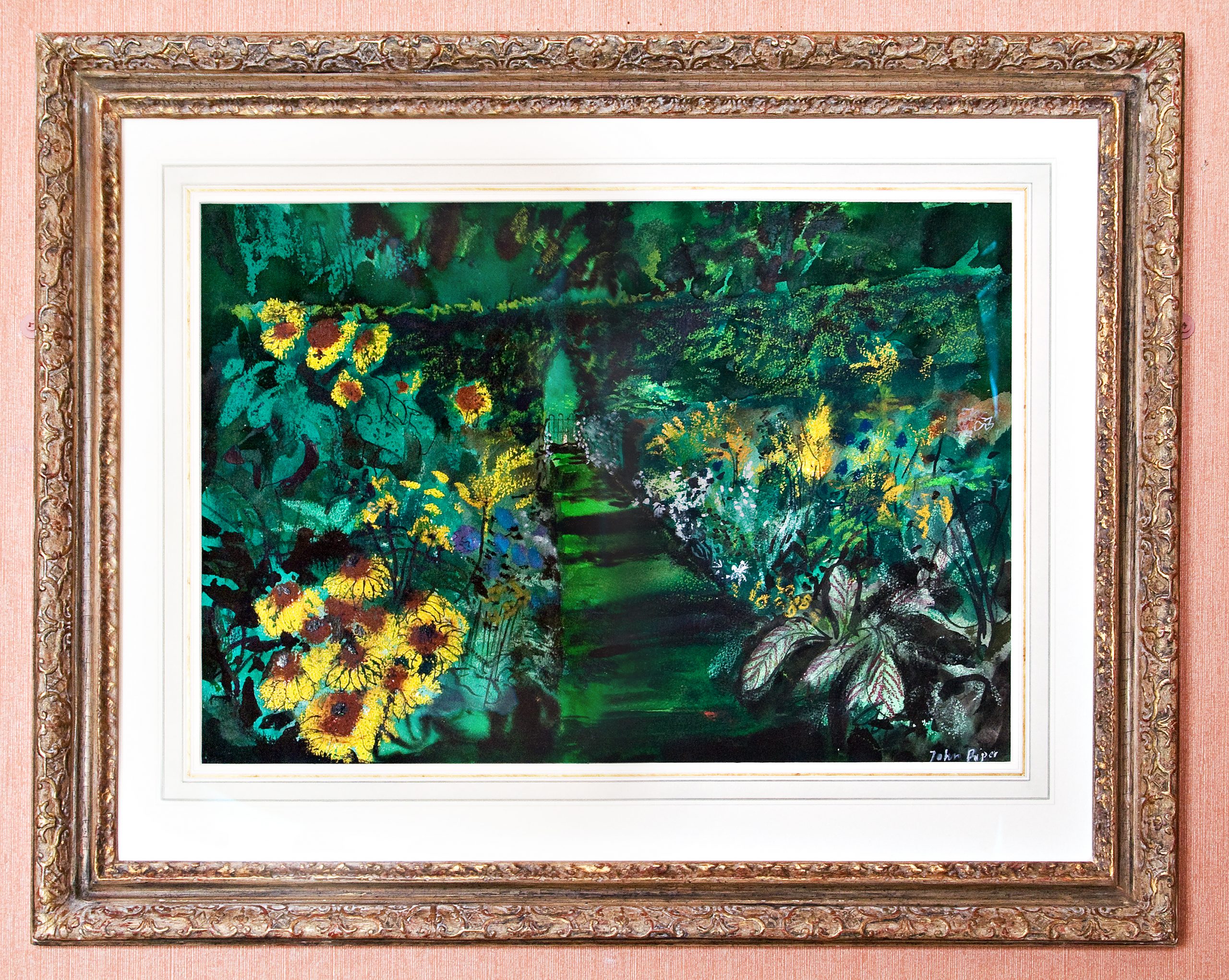 In contrast, the pictures in the dining room of Arundells are more descriptive and capture in detail the elegant Queen Anne frontage and the stages of evolution of the house visible at the rear. Nearby is a more expressive painting of sunflowers in Piper’s own garden at Fawley Bottom Farmhouse, near Henley-on-Thames. He lived there for many years with his wife, the librettist and writer Myfanwy Piper. The garden became an inspiration for John Piper’s work particularly in his later years.

John Piper was a commissioned war artist and recorded the effects of the Blitz air raids on Britain’s buildings, most famously Coventry Cathedral. His magnificently moody and evocative watercolours of Windsor in wartime were the product of Queen Elizabeth the Queen Mother’s most important act of patronage in the arts and were intended as a record of the castle in case it suffered from war damage. The pictures accompanied the Queen Mother when she moved to Clarence House in 1953.

After the war Piper produced great works of art for churches, cathedrals and other important buildings, including the stained glass Baptistry window in the new Coventry Cathedral and a beautiful altar tapestry for Chichester Cathedral. His output was prolific and included prints such as those of Wymondham and Huish Episcopi seen in the dining room, illustrations, book jackets, murals, ceramics, fabrics and stained glass.

John Piper was also a skilled and imaginative designer of theatre and opera sets, in particular for Benjamin Britten’s operas. It was a long standing collaboration and a great friendship also embracing Myfanwy Piper who wrote the libretto for three of Britten’s operas.

This partnership is represented in the dining room by a large screen print of the set for Britten’s last opera ‘Death in Venice’ which premiered in Aldeburgh in 1973. Piper captured, in his characteristically moody style, the atmosphere of Venice and the sad theme of the opera.

A further link to Aldeburgh is the set of nine Royal Crown Derby fine bone china plates on the top shelf of the display cabinet, commissioned by the Aldeburgh Festival of Benjamin Britten Operas, including ‘Death in Venice’ which marked Benjamin Britten’s 60th birthday. 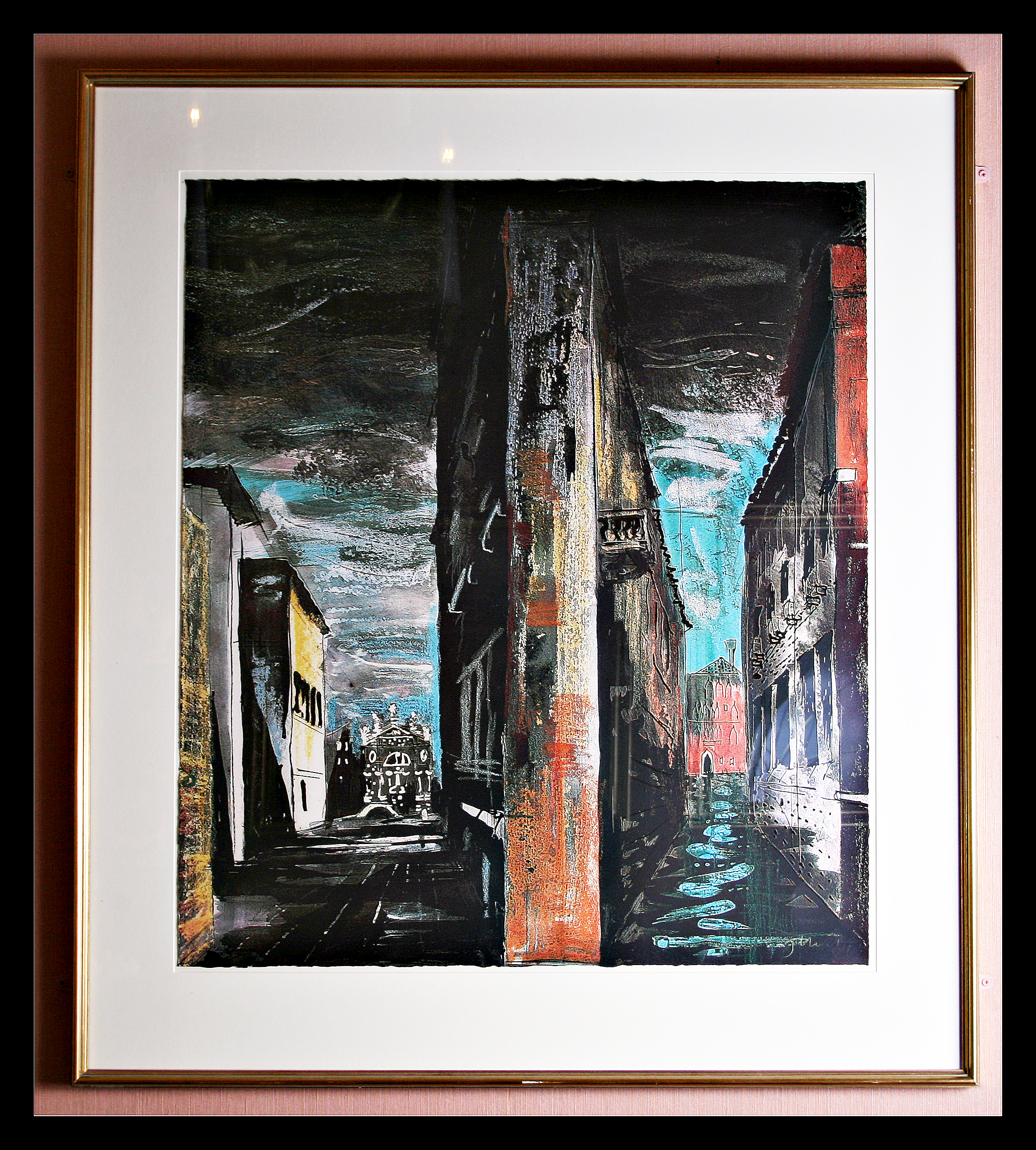 The Pipers and John Betjeman

Another notable Piper collaboration was with the great poet and conservationist John Betjeman. The two Johns joined forces to produce the Shell County Guides from the mid 1930s. The guides were aimed at the increasing number of motorists wishing to get out into the British countryside and discover its historic buildings, towns and villages. The opportunity arose at the time that Piper was turning away from the purity of abstract art and it was a welcome return to his antiquarian interests as a young man.

It became a long working partnership and personal friendship. John Betjeman was among the circle of artists and writers who descended on the old farmhouse at Fawley Bottom for weekends. Again Myfanwy was at the heart of things and was a great cook and hostess. She became the muse for two poems by Betjeman: ‘Myfanwy’ and ‘Myfanwy at Oxford’ which were affectionate tributes to her as an undergraduate at Oxford and then a mother of four children combining domesticity with her literary career. In the 1980s ‘Myfanwy’ became the lyrics of a song recorded by David Essex and Gene Pitney!

Myfanwy joined Sir Edward at one of his lunch parties at Arundells and one can only imagine her thoughts at being surrounded by ‘The Nine Pipers’ and mementos of the Aldeburgh Festivals. By that time John Piper’s health was failing and he died in 1992. Myfanwy lived on at Fawley Bottom Farmhouse and died there in 1997.

The Pipers were married for over 50 years. It was a remarkable professional as well as personal partnership and is captured in detail by Frances Spalding’s absorbing biography ‘John and Myfanwy Piper: Lives in Art’ published in 2009.

John Piper’s life and virtues may not have been the subject of Betjeman poetry or music, but his many achievements were celebrated in reviews and retrospectives. His abiding legacy was a mastery of both figurative and abstract art, often combining the two in his distinctive and expressive style to capture the ‘spirit of the place’ with drama and imagination. His output was prolific covering so many different media. He was truly one of the ‘Greats’ of the Twentieth century British art and to have such a selection of his work in the dining room at Arundells is a special thing.