The Garden of Immortal Peaches 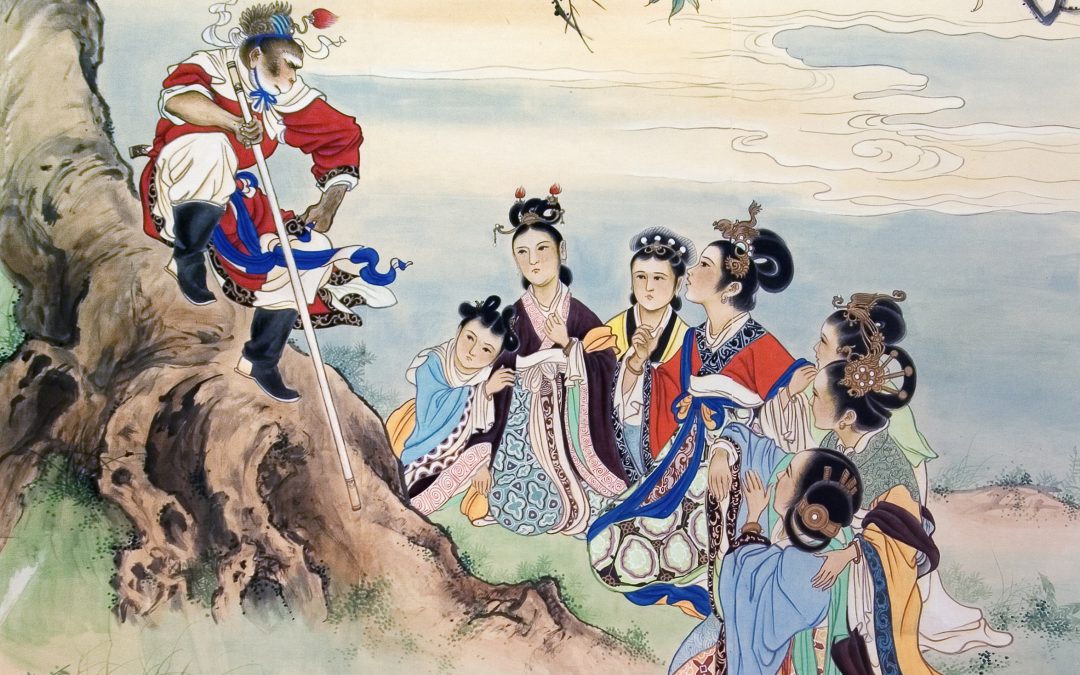 The Garden of Immortal Peaches

The wallpaper which adorns the walls of the grand staircase at Arundells was a gift to Sir Edward Heath from two of his private secretaries who worked in China. It is hand painted and was sent in rolls from China.

The scenes depicted are from stories about The Monkey King, a beloved classic in Chinese literature, well known to all in China and several other countries in the Far East.

The stories begin with the birth of a supernatural spirit, in the form of a monkey, from a stone egg in a magical rock. The monkey lived happily for many years, leading a somewhat hedonistic lifestyle as the king of a group of monkeys, but he became dissatisfied and, seeking immortality, left the mountain where he was born.

Under the tutelage of a Taoist master, Sun Wukong (as he is named by his master) learned many magical powers and had fantastical adventures. The wallpaper at Arundells depicts stories from one period in his life, in the heaven of the Chinese gods.

Having left his master, the mischievous and infamous Monkey King sought higher and higher status and caused mayhem. To keep him under control the Jade Emperor gave him the title of “Protector of the Horses “in the Imperial Stables .However when he  discovered he had been tricked and was a mere stable hand, he rebelled. The Jade Emperor then attempted to appease him by making him “Guardian of the Immortal Peach Orchard.”

The wall at the top of the staircase shows the Seven Immortal Maidens (distinguished by their different coloured gowns) who have been charged with picking peaches for the Empress Queen Mother’s banquet. The trees in the orchard take thousands of years to produce magical peaches, which bestow a variety of immortal gifts on the consumer.

The maidens inadvertently wake the “The Guardian of The Immortal Peach Garden “from a deep sleep, induced by having gorged himself senseless on the peaches. Irritated, he questions the maidens, threatening them with violence and beatings if they do not tell him about the banquet. He discovers that he has not been invited and immobilizes the maidens for a whole day. When they recover, they have the unfortunate task of telling the Empress Queen Mother that they could not fill their baskets because the Monkey King had eaten almost all of the peaches and cast a spell on them.

Needless to say, the Monkey King goes to attend the banquet but causes chaos before it occurs. (Another scene depicted  on the wall pape.r)

The illustrations on the wallpaper are derived from art works by the Chinese Artist Liu Jiyou, “A Commotion in Heaven. “