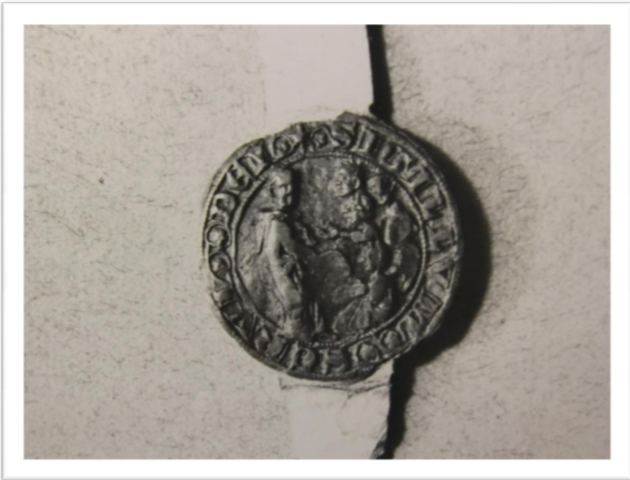 Henry of Blunsdon was a resident of Arundells from 1291 until 1316.

He was probably from Blunsdon in north Wiltshire, roughly five miles north of Swindon.  His date of birth is unknown but was probably in the mid 13th century. He was born during the reign of Henry III, he served Edward 1 as almoner for at least twenty-five years, and he died whilst Edward II was on the throne.

It is believed that Henry began working for Edward I in 1282. This was the year the king began his full-scale war of conquest upon Wales. The first reference[i] to Henry appeared in a roll of necessaries for 1282/3. This account recorded that Henry of Blunsdon bought a horse on 2 December 1282. This early reference alludes to the mobile nature of Henry’s position.

The office of almoner was focused principally upon charity. As well as organising the king’s formal alms, almoners organised the daily meting out of ‘broken meats’ from the king’s table and also distributed clothing on certain holy days, such as Easter. The scraps from the king’s table were placed upon an alms-dish and given to the poor. (The first reference to the alms-dish was in the reign of Henry III when, in 1229, the close rolls recorded that it was repaired.) The item was symbolic of the king’s charity and the role of his almoner.  His duties were extensive. In addition to distributing food and clothing, he was also charged with organising and facilitating the king’s other alms in the forms of cash. Fortunately he had staff to assist him. He had a good reputation and under his tutorage, staff helped to ensure that the king’s alms were distributed regularly and efficiently.

The almoner was usually reliant upon the cofferer for the money he needed to enable the king’s charity. However in times of insufficient funds it would appear that Henry used his own money and claimed it back. This would perhaps explain the receipt of £100 from the keeper of the wardrobe to Blunsdon in 1306 and subsequent payments in the 1306/7 account to Blunsdon of £14 4s. 5d. on the 3 December 1306, and £50 on 5 July 1307. If the almoner was lending money to the king it might explain why he kept his role for so many years.

This might also shed light on Blunsdon’s considerable personal portfolio of property. The king no doubt had a hand in these acquisitions. Not only did Henry hold estates in Blunsdon and in the neighbouring villages of Upper and Lower Widhill and in West Tockham, but also in Southampton, Dorset, Somerset, Warwick, Essex, York, Kent, Rutland and London

Blunsdon clearly became a man of some substance as indicated by lands and his ability to lend the king several large sums of money. Blunsdon’s relationship with Edward was surely a reciprocal one and the prestige that came with such regular proximity to the king undoubtedly assisted Henry’s private affairs. Henry obtained several benefices after 1292, including, for a time, archdeacon of Dorset, and several canonries in Wells, Chichester and St Pauls. Perhaps, in the long term, his appointment as a canon of Salisbury was the most auspicious of his preferments as it was to this place that he retired to after the death of Edward1 in 1307. It is presumed that he lived in this house from 1291 when he was in the locality and then permanently after the king’s death until his own death in 1316.

In the 1330s daily masses were still being said in Salisbury Cathedral for the souls of Henry of Blunsdon and his master Edward 1.  Henry also endowed a chantry for perpetuity, which lasted until the reformation. Chantry chapels employed a priest to sing masses for the soul of the founder. Blunsdon’s chantry funded two priests, who were housed over the years in 64 The Close (The Audley Chantry.)

[i] Information has been largely gained from a thesis, “The Pious Practices of Edward I, 1272-1307” by Charles Hedley Davies Christopher Farris.