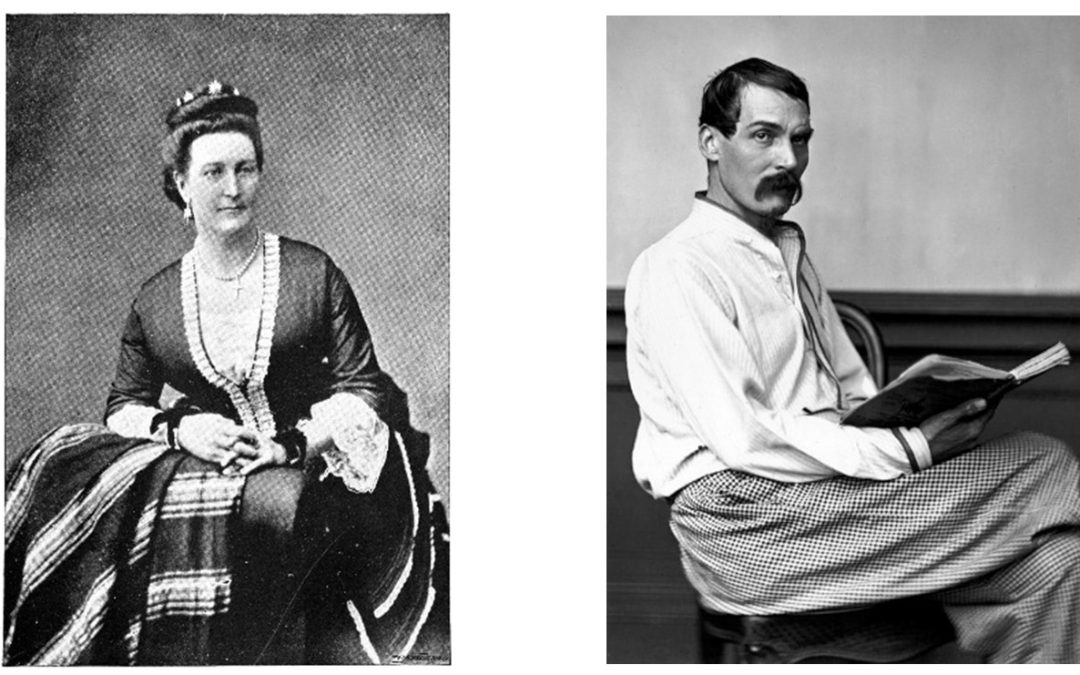 While Isla was with us this summer for work experience, she wrote this fantastic piece for us, we  hope you enjoy what she discovered, thank you Isla!

James Everard Arundell (born in 1721) was the third son of the 6th Lord Arundell of Wardour and in 1752 he married Ann Wyndham, the daughter of John Wyndham. Wyndham was responsible for rebuilding the house and giving it the façade you now see. He later passed the lease to his daughter and her husband James and therefore the house was given the name ‘Arundells’ after them. The focus of this blog post is not on them, however, but their very interesting great-granddaughter, Isabel Arundell. 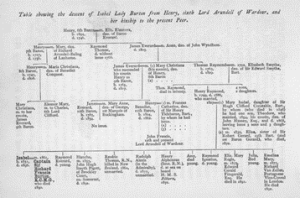 Isabel Arundell was the pinnacle of Victorian high society, an elegant and well-educated young woman with a keen interest in writing and theological studies, who also possessed a certain kindness and independence. She was one of eleven children and received a very traditional upbringing, typical to the upper classes during the Victorian era. In her posthumously published autobiography, ‘The Romance of Lady Burton’ Isabel notes that, ‘the only times we were allowed downstairs were at two o’clock luncheon (our dinner), and to dessert for about a quarter of an hour if our parents were dining alone or had very intimate friends.’ She also describes a love for solitude, often spending her time in alone in the woods reading, as well an interest in different cultures, ‘I was enthusiastic about gypsies, Bedawin Arabs, and everything Eastern and mystic, and especially about a wild and lawless life. Very often, instead of going to the woods, I used to go down a certain green lane; and if there were any oriental gypsies there, I would go into their camp and sit for an hour or two with them. I was strictly forbidden to associate with them in our lanes, but it was my delight.’ When she was in her late teens her parents moved the family to London where Isabel experienced a much more glamorous way of life, attending fancy balls and operas and mixing with other aristocrats.

International explorer Sir Richard Francis Burton was more of a rough around the edges fellow. He was well educated and attended Trinity College, Oxford but during his first term he allegedly challenged another student to a duel after the student mocked his distinct moustache and he was later expelled for watching horse racing. Richard had spent much of his early life travelling due to his father’s job as a Lieutenant Colonel in the British army and had learnt to speak French, Italian, Neapolitan, and Latin. He continued his love for linguistics when he joined the army of the East India Company and whilst stationed in Gujarat he became proficient in several Asian languages including Punjabi and Arabic. By the end of his life Richard was fluent in twenty-nine different languages. Also whilst in the army, he kept a group of forty tame monkeys and studied the way they communicated in hopes of compiling a vocabulary of ‘monkey language’. He gathered sixty ‘words’ before the experiment was concluded but the results were lost in a fire in 1860. 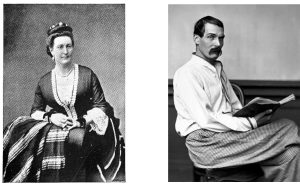 Isabel Arundell and Richard Burton met in 1851 in Boulogne, where Isabel was living with her family and Richard was visiting to attend a famed fencing school. Richard had been looking for a wife but had been turned down by many women for being of too low status, including his cousin Eliza Burton. Isabel, however, was completely enamoured with him, writing of their first meeting that, ‘I was completely magnetized; and when we had got a little distance away, I turned to my sister, and whispered to her, “That man will marry me.”’ The two fell out of contact when Richard went off to explore Asia and Africa, during which time he became one of a few non-Muslims to make the Hajj pilgrimage to Mecca. The couple reunited by chance five years later when they met in the London Botanical Gardens. Again, Richard left to travel now attempting to find the source of the river Nile but during this time they kept in contact. Isabel wrote to him twice a month although only received sparce replies with one gap of twenty months between letters.

At long last, in 1859 Richard returned and soon proposed to Isabel but her mother refused to allow the marriage as the Arundell family were Catholics and Richard was Agnostic. Isabel then wrote her mother a very passionate letter describing her longing for adventure, ‘I want to Live. I hate the artificial existence in London; I hate the life of a vegetable in the country; I want a wild, vagabond life…you will certainly repent it if you keep me tied up,’ and her love for Richard, ‘I wish I were a man. If I were, I would be Richard Burton; but, being only a woman, I would be Richard Burton’s wife…I would at this moment sacrifice and leave all to follow his fortunes’. However, Isabel’s mother still refused claiming she would become ‘paralysed’ if the couple were to marry so they enlisted the help of the Archbishop of Westminster who gave Richard a special allowance to enter into a mixed faith marriage and eloped in secret in 1861. 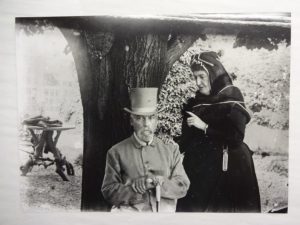 The couple at home in their garden in Trieste, Italy

Isabel Arundell (now titled Lady Burton) took on the role of Richard’s most loving and hardworking supporter in the following years. The couple had to live mainly off Richard’s army pay. He had entered the Diplomatic Service shortly after the couple married and became a consul for the British army. They also earned money from Richard’s book deals with him publishing over forty books in his lifetime, travel narratives as well as translations into English. Isabel was instrumental in the publication process acting as his agent, publicist, and proof-reader. Isabel’s dedication to her husband seemingly knew no bounds as she was regularly separated from him for months on end as he was off performing his duties as a consul.

Richard was first sent to Fernando Po (an island belonging to Equatorial Guinea, now called Bioko) where Isabel could not accompany him as the climate was deemed too dangerous for Europeans. Then to Santos in Brazil, Isabel joined him, and they travelled extensively around the country including visits to Petrópolis, the Moro Velho gold mines and the Bay of Rio which Isabel gives a beautiful description of in her autobiography, ‘At the rickety landing-place begins a little railroad, which runs for eleven miles through a mangrove and papyrus flat to the foot of the Estrella range of mountains. Here we changed the train for a carriage drawn by four mules, and commenced a zigzag ascent up the mountains, which are grand. We wound round and round a colossal amphitheatre, the shaggy walls of which were clothed with a tropical forest, rich with bamboos and ferns, each zigzag showing exquisite panoramas of the bay beneath. The ascent occupied two hours; and at least, at the height of three thousand feet, we arrived at a table-land like a tropical Chamounix. Here was Petrópolis, where we tarried for some days.’ 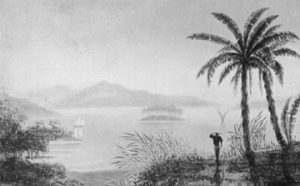 The Bay of Rio

The couple then moved to Damascus for Richard to continue his consul role, but it’s important to remember here that whilst Isabel’s life was often dictated by her husband’s he was not the only one with a passion for exploration. Isabel describes visiting Damascus as a ‘childhood dream’ of hers: ‘I should follow the footsteps of Lady Mary Wortley Montagu, Lady Hester Stanhope, the Princess de la Tour d’Auvergne, that trio of famous European women who lived of their own choice a thoroughly Eastern life, and of whom I looked to make a fourth.’ Whilst recounting an on-foot section of her journey through Lebanon to get to Damascus (meeting Richard who was already in the city), Isabel reflects on the places she had travelled, ‘I could not help contrasting the new world and the old. In Brazil, though rich in luxuriant vegetable and animal life, there is no history–all is new and progressive, but vulgar and parvenu; whereas Syria, in her abomination of desolation, is the old land, and she teems with relics of departed glory. I felt that I would rather abide with her, and mourn the past amid her barren rocks and sandy desert, than rush into the progress and the hurry of the new world.’ 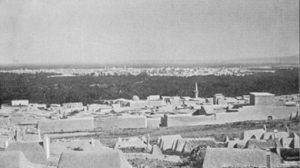 Damascus from the Desert

After Damascus, Richard was sent to Trieste, Italy where the couple lived for 17 years. In 1886, Richard was appointed a ‘Knight Commander of the Order of St Michael and St George’ (KCMG) by Queen Victoria for his work as a consul, earning him the title ‘Sir’. The couple lived a quiet life, now having the freedom to write and travel, until Richard’s death in 1890. Isabel subsequently devoted herself to writing Richard’s biography and would accept no assistance or advice. She also controversially burned several of his manuscripts and papers, including his English translation of ‘The Perfumed Garden’ (essentially a fifteenth century Arabic sex manual) even after being offered £6,000 for the manuscript. Isabel’s posthumous collaborator William Henry Wilkins argues that she acted from a sincere belief that ‘out of a thousand men who read the work, 15 would read it in the scientific spirit in which it was written, and the other 985 solely for filth’s sake’, and feared that publication may taint her husband’s reputation. Isabel’s final tribute to her husband was designing his tomb, shaped like a tent to honour his wish that, rather than burial or cremation, he would like them ‘to lie in a tent, side by side’. Isabel was buried there when she died in 1896.

The tomb of Isabel Arundell and Richard Burton