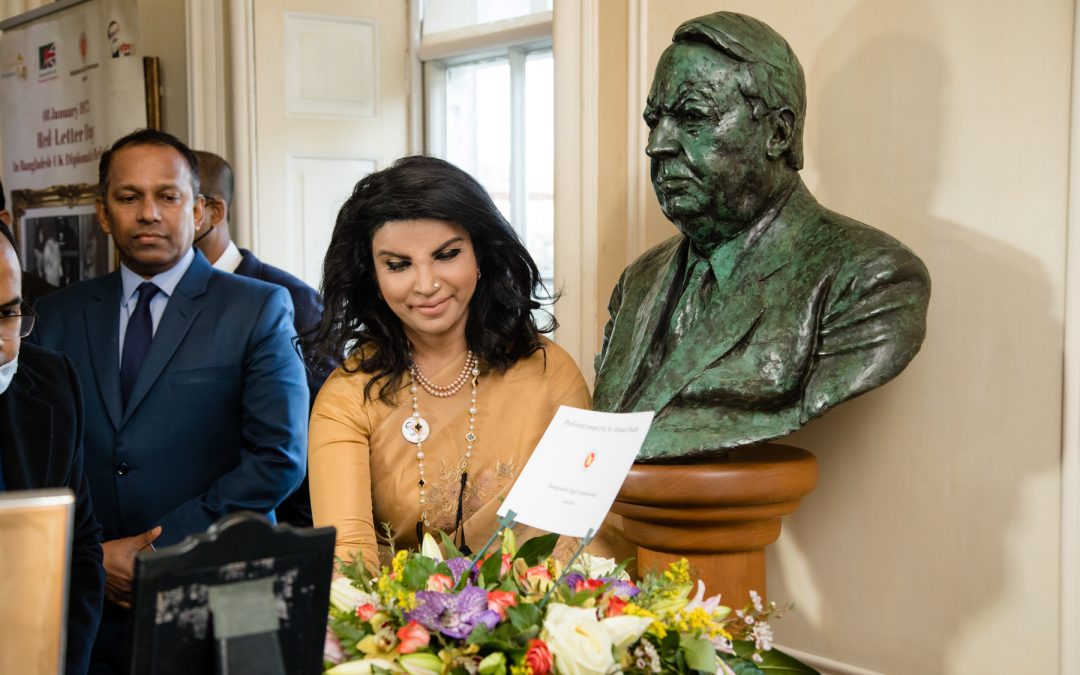 The award will be presented to those individuals who have made extraordinary contributions in the promotion of Bangladesh-UK friendship and the shared values of the two nations. The Sir Edward Heath Charitable Foundation will be an institutional partner to the Award. The Sir Edward Heath Charitable Foundation maintains Arundells in Salisbury, the former home and gardens of Prime Minister Edward Heath, for members of the public to visit, and promotes discussion of events in the history, politics and international relations of the second half of the Twentieth Century. 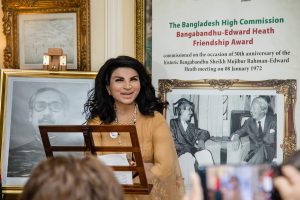 To find out more about the history behind this award, read Tom Chidwick’s article below:

In his 1976 autobiography, The Way the Wind Blows, the former Prime Minister and two-time Foreign Secretary, Lord Home of the Hirsel, reflected on his experience of the perpetual delicacy of international relations, concluding that the Commonwealth proved that ‘politics is essentially about people’. As a consummate diplomat—who, his biographer Kenneth Rose, once remarked, was a ‘slender pillar of probity, looked up to by his countrymen, his integrity unquestioned even by those who disagreed with him’—Home counselled that, even in a period of relative international decline, a more attentive nurturing of the Commonwealth would provide Britain with ‘the greatest possible number of understanding friends’ across the 1970s.

On 8 January 1972, one such ‘understanding friend’, Sheikh Mujibur Rahman, the leader and founder of the Bangladesh People’s League (Awami League), held a surprise meeting with Edward Heath in London. Having been released from nearly ten months of imprisonment in Pakistan, the first Prime Minister-elect of a newly independent Bangladesh paid a ‘courtesy call’ on No. 10 Downing Street before travelling to Dacca, with Heath later telling President Nixon that he received news of Rahman’s release from Islamabad when ‘Bangabandhu’ (Friend of Bengal) was just an hour away from London.

After the establishment of East Pakistan (now Bangladesh) in October 1955 (under the ‘One Unit’ scheme, intended to create a homogenous West Pakistan and counterbalance the political dominance of the East’s substantial Bengali population), a mass uprising in early 1969, the introduction of martial law, and the disregarding of the country’s first federal democratic elections was followed by Sheikh Rahman’s unilateral Declaration of Independence and Bangladesh’s Liberation War. In total, it is estimated that the genocide committed in Bangladesh during the War led to the deaths of more than a million people, as well as the torture, rape, and murder of over 200,000 women, and the displacement of almost 40 million Bangladeshi civilians.

In a cordial and constructive hour-long conversation, Rahman stressed that he wished to establish good diplomatic relations with neighbouring West Pakistan—comparing Bangladesh’s independence to a ‘parting as of brothers’—and informed Heath that the fledgling nation would seek full membership of the Commonwealth. As its current Secretary-General, Baroness Scotland, told a gathering at the Bangladesh High Commission in London earlier this month, the fraternity of former British imperial territories was to be the first major international organisation that Bangladesh joined as Rahman’s ‘values matched those of the Commonwealth’. As ‘Bangabandhu’ himself said on his arrival at New Delhi Airport on 10 January, he was returning to ‘a free, independent and sovereign Bangladesh’ which was continuing its journey from ‘darkness to light, from captivity to freedom, from desolation to hope’. 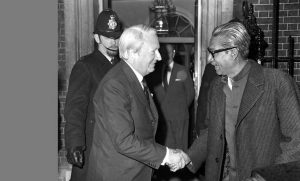 Whilst the post-war period was arguably characterised by a lessening enthusiasm in Britain for its former territories—which was exacerbated by the country’s entry into the European Economic Community in 1973—Edward Heath’s administration had been elected with a promise to bring about a ‘new era of British diplomacy … leaving behind the years of retreat’ and re-establish Britain’s reputation as ‘the firm defender of her own interests and the skilful and persistent partner of all those who are working for a lasting peace’.

Although Sir Edward later suggested that ‘there was never any question, however, of outside interference in the internal affairs of an independent Commonwealth country’, the UK government was a key powerbroker in the region, with Heath telling President Nixon on 13 January 1972 that the UK wished to preserve the West’s ‘position and interests in the sub-continent’ and encourage ‘Mujib, as well as the Indians, to be constructive and to avoid recriminations’. In addition to donating £14 million of relief aid to India to support the 10 million Bangladeshis who had relocated to West Bengal, Heath also sought to ensure that Rahman’s regime received ‘early recognition and support from the West’ to prevent Bangladesh from falling into ‘the hands of left-wing extremists’.

Likewise, the Government’s decision to introduce the Pakistan Act—which granted important voting and civil rights as well as routes to British citizenship to Pakistani citizens in the UK—after the country’s secession from the Commonwealth at the end of January 1972 laid the foundation for the Government’s decision to admit 57,000 Uganda Asians, expelled from Uganda by General Idi Amin, in August 1972, contrary to the anti-immigrant sentiments of influential Conservatives including Enoch Powell and The Monday Club (a right-wing Conservative group, founded to oppose decolonisation in Africa) as well as the National Front.

With the UK’s formal recognition of Bangladesh on 4 February 1972—which established strong diplomatic relations between London and Dhaka and paved the way for its induction into the Commonwealth on 18 April—Edward Heath’s administration cemented what Oliver Dowden MP (Chairman of the Conservative Party) recently described as ‘deep and enduring bonds between the UK and Bangladesh, bound by kinship, culture, and shared prosperity’. Fifty years on, the Bangladesh High Commission’s decision to establish a ‘Bangabandhu-Edward Heath Friendship Award’ for ‘extraordinary contributions’ to friendship between the two nations—and the establishment of an ‘8 January Foundation’ to promote the significance of this meeting to young Brits and Bangladeshis—seems a fitting tribute to what the late Zig Layton-Henry dubbed Heath’s ‘courageous and consistent’ interest in race relations and keen sensitivity to the lived experience of immigrants in Britain. 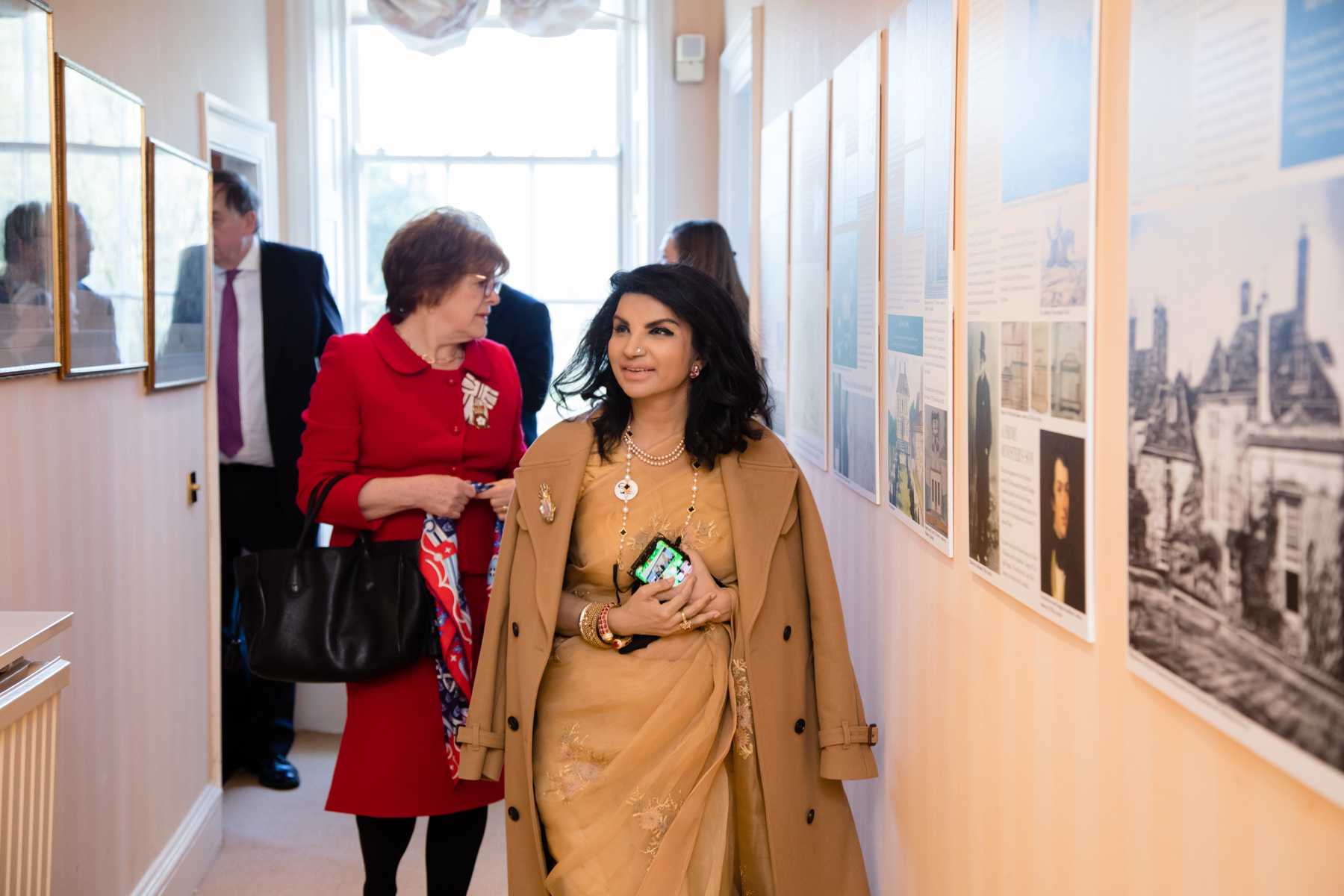