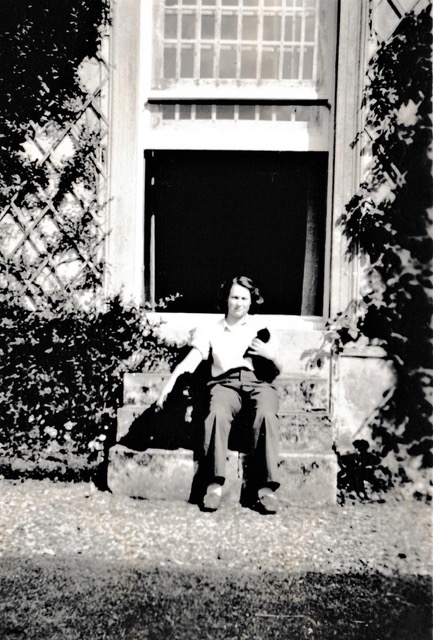 (Image shows Elizabeth with Peterkin and Tribulation 1942. South door of Arundells with brown tape on glass to prevent blast damage)

I’m being radical, rather than keeping things chronological I thought you would enjoy reading about the Bown family. I would like to thank Elizabeth Allsopp for visiting and sharing her fascinating memories with me.

William and Marjory Bown lived in Arundells from 1941-1947. Reginald William Bown had been a managing director at Lloyds bank in London. The 4 directors left London during the war and William Bown was the director for the southwest, based in Salisbury. His second wife (Elizabeth’s mother, was Fanny Marjory Kingwell) There were four children, William (Bill), Mary (Coleridge), Isobel and Elizabeth (Allsopp). Bill, like Edward Heath, was a gunner. He apparently always felt guilty because he had been sent on a course and missed Dunkirk. He lost friends and comrades. He was a keen golfer and when at Arundells would get his sisters to play croquet so that he could keep his eye in.

Extract from a letter written by Elizabeth Allsop May 2019.

“We, as an extended family, lived in the dear house from October 1941 till the year my father (who was not an ordained cleric) died in 1947. Both grandmothers lived with us and my brother spent a long convalescence leave there, while my eldest sister, Mary  (a teacher) and I were there in school holidays and my other sister, Isobel, spent as many weekends as possible there to escape the bombing. St Thomas hospital, where she worked, had 2 direct hits from V1 rockets.

With the lease of Arundells came the gardener, Mr Asher, who grew flowers, vegetables and fruit to supply the house 12 months of the year. My father used to shed the cares of his day’s work by picking up his split cane fishing rod and walking down to the river, to cast up the Avon or across to the point where the Avon and Nadder met and merged. Trout and Grayling were a welcome addition to the limited menu provided by rations. “

Elizabeth and William Allsop revisited Arundells on Thursday 11th July 2019. Elizabeth provided written notes, which I reproduce below (her words in italics), some photographs, and talked to me as we walked around the house.

(Entrance Hall) 1st room on the right, with bookshelves and loo at the back of it. Used gratefully by the Red Cross as their library depot. Books were sorted then distributed to hospitals and army camps on Salisbury Plain.

Ist left (Drawing Room) Our sitting room, facing east and south. The two grannies living with us sat in the two best chairs, nearest to the fire. The deaf one read the newspapers to the nearly blind one and they both smoked their cigarettes with pleasure. Young Officers who came from Larkhill and Bulford brought them supplies of Army cigarettes, which were available in NAAFI canteens free or at rock bottom prices. My father’s mother lived to 96 and the other granny reached 85 and thought that was far enough, so she gave up and died peacefully.

The next room on the left was a rather narrow dining room (library) and beyond that was the large “new” drawing room (now the terrace) in use at the time as a wool depot for the Red Cross. Keen and capable knitters received wool supplies and delivered back the finished articles-mostly socks. Red Cross helpers came and went as they wished. There was also a ping-pong table in this room.

On the right hand side of the hall there were some steps up to my father’s study on the right (dining room) and the pantry to the left (present kitchen) ( I think it was 9 steps)The pantry had a large sink, a gas ring and an array of floor to ceiling cupboards for china and glass, and drawers for silver and cutlery. Back at the original hall level you reached a wash basin/loo /cloakroom and door to the garden straight ahead. Both of the rooms were very dark as there was a building (demolished by the Hawkings in the sixties), which blocked the light on the north side. The kitchen was under the study and pantry.

On the right there were steps down (eleven) to the scullery, kitchen, larder and a sitting room for “domestic staff” (should you be lucky enough to find any.) We had an excellent cook and her reformed alcoholic husband, who had been a sergeant in the army in India and a much-respected man till he was left a legacy, which he methodically drank away. Unfortunately, his reform proved temporary and so did their residing at Arundells. “Dorrie” followed as cook with her infant daughter to keep her company. Her husband, Frank spent his embarkation leave with her and we tried to do all her work so that they could be together. He did not return-killed in action in North Africa- so Dorrie and Mary Jane stayed on till a Devon farmer persuaded Dorrie to marry him. So, you see there were a great variety of inhabitants of Arundells.

In the garden Mr Asher ruled supreme and kept the house supplied with vegetables, salads, fruit of all sorts and flowers for the house and pots of bulbs to cheer the end of winter/early spring. I remember the apricot tree, espaliered on a south facing wall and the greengage and other plum trees and peaches and in the green house, black grapes from the vine. There were two unheated greenhouses and one heated one and frames in the vegetable garden and fruit bushes especially currant. Mr Asher had been William Bown’s batman during the First World War when he served in the Welsh Regiment.

The path to the river (grass) led away from the main lawn (croquet) between two herbaceous borders backed by espaliered apple and pear trees down to the river. We bought a skiff through an advertisement in the Salisbury Journal and I bought a homemade canoe/kayak with my carefully saved pocket money (I was 15 at the time) and had a great deal of enjoyment. It was not a good idea to go downstream of Harnham Bridge-the flow of water was powerful.

A great many “embarkation leaves” were spent by young women (one an American with no relatives in Britain) and their husbands, who then disappeared to Europe, India or Malaya-too many, alas did not return. And I have been remembering vividly, waking at 4 am-first light-as planes pulling gliders flew over the Close past the cathedral, on their way to the long-awaited D Day and the invasion of Normandy – 6th June.

My father died- denied his longed for retirement-in 1947, (  13 March 1947 in Broofield nursing home in West Kirby) by which time my eldest sister was married and living in London. My brother was working and living in Chester and my other sister was about to marry a man who had survived 4 years as a prisoner of the Japanese and she would be living in Hampshire. There was, luckily, a break clause in the lease, so my mother and I sorted out the contents of the house and bade it a sad farewell- she to find other places in the Close to live for the next 12 years or so and I to live in Edinburgh for 18 months and then returning south I married an impecunious young barrister. By and large I can finish this account in true fairy story way “and they all lived (mostly) happily ever after. “

Entrance Hall-This was a separate closed off room, unlike now. Elizabeth remembers having to climb up 3 steps to enter the room. There was a bookcase at the end, a toilet and cloakroom and access to the garden.

The now washing room was the servants’ sitting room and the boiler room the main kitchen. The panic room was a small cold room where game etc was stored.

When the family obtained the lease, Isobel arrived at the house as the packers were removing the Fletchers belongings. She then slept in the house on an army camp bed until their furniture arrived. If the house was empty they believed it would have been commandeered. Her bedroom, when she was home was the room now used as an office. It had some sort of linen inner walls, which would move and create noise with the wind, it was consequently known as the room that breathed.

The current library was the family’s dining room. Elizabeth referred to it as a dark narrow room, which it would have been with the fireplace where the French windows are now.

At the top of the stairs there is a large window. Elizabeth told how she would climb through this window and on to the Victorian extension to sunbathe, frequently without any clothes. She put some on when she noticed that the reconnaissance aircraft were flying repeatedly lower and lower over the house.

The Blue bedroom was a guest room and where Bill would stay when he was home on leave. The Red room was Elizabeth’s bedroom, but there wasn’t a bathroom then. Her parents’ bedroom was the one at the front of the house. 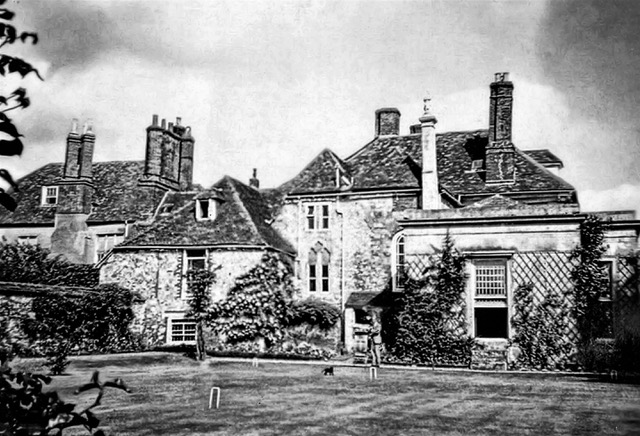