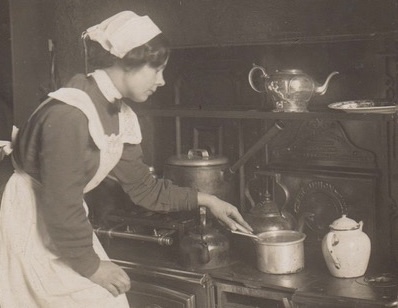 As with all grand houses there was an upstairs and downstairs divide. Those who worked mainly downstairs and lived up in the attics haven’t been recorded, until now, in the history of Arundells. They are, without doubt, part of the story so I thought I would attempt to find out what I could about them. Sometimes there is so little information it is hard to find a trail, however, the census gives a starting point.

In 1901, on the night of the census, working for Canon Douglas and Lady Ellen Hamilton Gordon and their 2 adult daughters were 4 live in members of staff. There was probably also a cook, gardener and groom or driver who lived elsewhere or were away on that evening.

Unfortunately I have not been able to discover anything with certainty about Louisa. Her name is practically undecipherable in the census and there are several possible variant spellings.

Lilly, according to the census, was born in 1883 in Damerham. There is a record of a Lily Colbourne born in 1882 in Fordingbridge, her mother’s name is not recorded which suggests she may have been abandoned or her mother died in child birth, both are strange, was her name selected at random? Colbourne is a common name in Fordingbridge.

Lilly had a hard start in life; it would appear that she was brought up in the workhouse. In the 1891 census she is listed as an inmate at Fordingbridge workhouse. It is difficult, if not impossible, to trace an ordinary person between the censuses, unless they marry, die or commit a crime, so we cannot ascertain how long she worked at Arundells. There is a Lilly; listed as from Damerham in the 1911 census working as a cook in Surbiton, if it is her it was a form of progression.

Beatrice Vallis was born in 1879 in Wyle. Her father William and mother Sophia were both from Orcheston St George. In 1881 they lived in Wyle and he worked as a carter for the mill. They had 5 children, born in various villages, the latter two in Wyle. Beatrice’s oldest brother George was only 11 but was working as an agricultural labourer. William and Frederick aged 9 and 6, were both at school and Sidney aged 4 and Beatrice aged 2 were at home.

In 1891 George 21 and Beatrice, 12 were both listed as boarders at 66 Morley Road, Wood Green, Tottenham. Back at home in Wyle their parents had had two more children, this might have been why Beatrice left at such a young age. George was working as a bricklayer. Charles Williams, head of household was also a bricklayer and he had a wife called Ellen, they were both from Wiltshire so there was possibly a family connection. George stayed on in London. In the 1911 census he was working as a tram driver, married to Charlotte and they had 8 children, three of whom had been given his siblings names.

It is unknown how Beatrice ended up working for the Hamilton -Gordons however it would appear that she was a valued employee as in 1911 she still worked for Lady Ellen in Arundells.  Catherine Hamilton Gordon died in 1913 and Lady Ellen died in 1914. In 1939 Beatrice lived as a house keeper and companion to Ellen L Gordon, the youngest daughter of the Hamilton Gordons in 38 Belmont Lane, Stanmore . She remained in the area after Ellen Gordon’s death in 1942, until she died in Harrow in 1971.

Annie White, housemaid in 1901, was born in Figheldean in 1879. Her father Henry, 23 was an agricultural labourer and carter. Her mother Jane, from Fittleton, was 27. She had an older brother and sister.

In 1881 she had acquired a younger brother George, who was 7 months old and in 1891 two more brothers Thomas 8 and Alfred aged 5.

Annie married on the 26th of March 1910 in Laverstock. Her address was given as the Close; whether this was still Arundells is unknown. Her groom was a year older, he was George Philip Godwin and he was an engineer. Annie’s father, Henry was a witness at her wedding. In 1911 she lived at The Yard in Laverstock and in 1915 she and George had their only child Ivy Annie May Godwin.

Annie and George lived in Laverstock for the rest of their lives. Annie died in 1952.

(Image is from Pinterest and does not link to Arundells)